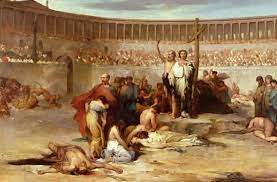 “While we were still under arrest, my father, out of love for me, was trying to persuade me and shake my resolution. ‘Father,’ said I, ‘do you see this vase here, for example, or waterpot or whatever?’

And I told him: ‘Could it be called by any other name than what it is?’

‘Well, so too I cannot be called anything other than what I am, a Christian.’

At this, my father was so angered by the word ‘Christian’ that he moved towards me as though he would pluck my eyes out. But he left it at that and departed, vanquished along with his diabolical arguments.”

– Account from a prison diary of Perpetua and Felicitas martyred in Carthage in 202/203 B.C.

Perpetua, along with her infant son and maid, friend and fellow believer, Felicitas, were unmercifully starved and brutally tortured. She was given one last chance to recant her faith before being thrown into the Roman gladiator arena. Wild animals were released into the arena to kill the prisoners, but when the animals were unsuccessful in their task, the huge crowd became bored and chanted for blood. Prompted by the mob, the gladiators entered the arena with their swords drawn. As they approached, Perpetua guided a gladiator’s sword to her throat in a final act of willingness to die for her faith in Jesus.

Reading Perpetua and Felicitas’ story of martyrdom reminds us that we’re called to a high purpose and one that will include sacrifice, suffering, and even perhaps death. We are called to embody the life of a follower of Jesus, not just embrace Christianity in name only. As world and cultural views change, “The Truth” –God’s presence and His Word– aggravates those who resist it, and evil grows more robust. I am convinced we will see and experience more suffering and martyrdom. It’s predicted in the Bible. The godless will continue to be relentless and attempt to fast-track their beliefs into every aspect of our lives to increasing degrees. Choosing The Truth and His truths will become steadily more difficult.

This is not “breaking news.”

Just as air slowly leaks out of a tire due to a small nail puncture and is initially undetected by the human eye, so too are we seeing the deflation of God’s truths on the earth and in the lives of people. Our world is losing the Breath of Life. Evil is increasing and is creating an irreparable path of destruction. It’s not difficult to see the enormous effects of our culture’s brokenness and sinful choices.

Are you ready for what’s coming? Is God dead?

In 1882, well-known atheist Friedrich Nietzsche cynically wrote The Parable of the Madman, in which the Madman makes a profound statement: “Whither is God?” he cried; “I will tell you. We have killed him – you and I.  All of us are his murderers. But how did we do this?”

It’s still a relevant question today. How did we get so off-course and deceived from The Truth? It’s one thing to disagree with a truth and another to disagree that there is A Truth. We know the very existence of planet earth depends on the sun’s gravitational pull (it’s a proven scientific truth). If we lose the sun’s connection, the planet will instantly go spinning out of control ending all life on earth. Our connection to the sun is foundational and nonnegotiable.

When we lose the foundational truth of who God is in our life, we too spin out of control.

That is precisely what is happening in our culture today. Award-winning author Eric Metaxas interviewed documentary filmmaker Matt Walsh on his recent feature film, What is a Woman?. They discussed the incredible inability of those pushing for a gender-neutral world to define one simple term: Woman. Those who were supposed to know –scholars, doctors, and even other women– could not define who or what a woman was. Matt Walsh (very comically, I might add) was able to show that those pushing for this agenda had to deny the foundational scriptural truth that God created us “male and female.” Genesis 1:27

There is no confusion or gender dysphoria in God’s eyes. When you accept foundational Biblical truths, you are anchored (like the earth to the sun) in God’s unchanging gravity. When you’re not fastened to truth, you are left spinning out of control, lost in complete confusion. And you in turn cause irreversible damage to others, as Abigail Shrier writes about in her book of the same name. Perpetua and Felicitas stood in the gladiator arena, anchored to truth despite the atrocities happening around them and to them. They refused to recant the one thing they knew to be true. In the same way, our grounding foundational truths are and will always be in God and His son, Jesus.

Will you stand on The Truth, or will you deny Him?