During my career so far, I’ve produced films or TV programming in about 70 countries around the world. In many cases, it’s not a difficult challenge – even when shooting without permits. But what about shooting in countries that aren’t so friendly to video production – especially when for schedule or budget reasons you can’t get permission or permits for all the locations, or a business visa for the country?

Certainly if it’s a major production with lots of equipment and a large crew, permits and permission is absolutely required. In those cases you may also need to hire police officers, fire department safety officer, and go in under a business visa. But most of my projects have been produced documentary style with a crew of just a few people. In those situations, there are some ways around all the trouble and expense if you play it smart. 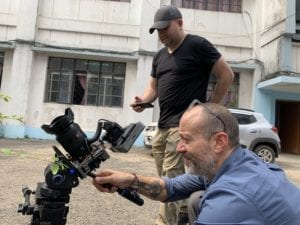 We just finished a pretty grueling documentary schedule filming in India, Mongolia, China, Korea, and Japan. So I asked our Director of Photography Brad Knull for his suggestions on how to get top quality video in the fly. As you’ll see below, Brad’s first recommendation is to look, act, and think like a tourist. We’re not attorneys and I always recommend you get good local and legal advice, but based on Brad’s experience, here’s his great advice:

Brad Knull:  My first tip would be to actually BE a tourist. By that I mean truly embrace a curiosity and respect for the places you travel. Remember, you are a guest in these countries, and while you’re there to tell a story, it shouldn’t be about taking all the time.

Recently we were in Calcutta and wanted to get some street market shots for a documentary film. So we wandered into a very busy market area. At first we felt like aliens that had landed on another planet. People were looking at us strangely and it even felt a bit hostile. Then we began asking people permission to take their portraits and showing them the shots on the back of our cameras. Soon, everyone wanted us to take shots of them. After an hour, they were taking selfies with us and inviting us to come home and have dinner! I’ve had this experience all around the world, including being invited into mosques in the Middle East, temples in Thailand and coffee around an open fire in Ethiopia. So tip #1 has little to do with gear and more to do with your attitude. Be curious, be respectful and be a tourist in the sense that you are truly exploring the places and cultures you encounter. 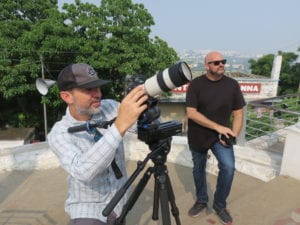 Beyond that here are some nuts and bolds techniques we’ve used successfully in places like China, Vietnam, Cuba, India and other countries that may be less than thrilled you are filming:

1. Have a simple truthful statement. Lies are hard to remember, so come up with a reason why you are taking pictures that is as truthful and simple as possible without spilling all the details. Memorize that simple statement and have everyone on your team give that version of the truth when questioned.

2. Use DSLR or mirrorless cameras that shoot high quality video. In the last few years camera technology has advanced so rapidly that there are a huge range of cameras capable of taking UHD, 4K or HD quality video that is nearly equal to professional video cameras. These small cameras which were originally designed for still photography don’t raise nearly the questions that professional video cameras raise and can usually be taken even into locations where filming is strictly forbidden.

3. When necessary, shoot without a tripod! If there is one piece of gear that will get you singled out, it’s a tripod. I was traveling in Egypt shortly after the Arab Spring uprising a few years ago and when the customs official found my tripod it set off the alarm bells. He asked me repeatedly, “Where is your professional video camera? Where is your professional video camera!” Fortunately, I was traveling with a DSLR camera (see tip #1) and so after he looked thru every single pocket of every single bag he let me go with the warning: “If we had found professional camera there would have been big problem.” 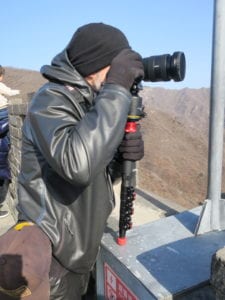 4. Try to use a monopod. (Sometimes you can get away with this.) Steady shots are the hallmark of a professional production and the monopod is the best stand-in for a tripod. This piece of gear usually won’t get the attention of a customs official, as it is often used in still photography, but some places (like museums, temples and other public places) simply won’t let you use any device that supports the camera because they’ve become wise to the fact that professionals like these kinds of tricks. On our last trip, between shots, Phil even carried the monopod like a high-tech walking cane and he was never once stopped!

5. No monopods allowed, now what? As mentioned in tip #1, modern camera technology has made amazing advancements. One of those is internal image stabilization both in the camera and in the lenses. Most of the time these setting can help you steady a handheld shot. Experiment with these and see how to get the best results. Do some testing first because I’ve occasionally had negative results under certain conditions so make sure you know your gear and how best to utilize these setting.

6. Using camera straps, 3 points of contact and wide lenses. Here are three very practical ways to get steady shots under most challenging circumstances:
1. Use your camera strap as a sling for the camera by pushing the camera into the strap.
2. Three points of contact are better than two. Use your face, eye socket or forehead in addition to your hands for a third point to hold the camera.
3. Wide lenses are more forgiving. When in doubt, go wide. No one can hold a 200mm rock-solid handheld. A 16mm lens on the other hand is pretty forgiving.

7. Slow motion is your friend. Let’s face it, no matter how steady your hand may be, shooting with a lightweight camera designed for photos makes it impossible to hold it perfectly steady. Slow motion shots can smooth out some of those sins and it also can make for some pretty epic imagery.

8. Ask forgiveness not permission. This sounds worse than it really is, but in most cases you can grab a shot before you get shut down and in most places the bureaucracy of asking will take up most of your day. I once set up a timelapse shot overlooking a major international city. When authorities saw my tripod (see tip #2) they told me it would require permission. I sent the producer off to get the permission as I walked away from the camera. Two hours later when he returned to tell me we’d been denied, I took the camera down and returned to the car. Fortunately, the camera had been shooting the locked off timelapse the entire time and we left with the shot we wanted. But be careful on this one, because in some places this might land you in jail.

9. Don’t film military personnel or government buildings without permission. I was once filming on the border of Syria and a young intern stuck his camera out the window to get a picture of a UN compound. The security guards pulled our van over, took our passports, and detained us for a few hours. Luckily, no jail time was necessary. Speaking of jail, a good way to end up there is to point a camera at one of the above mentioned military or police buildings or personnel.

10. Don’t speak too openly in public about why you have cameras. Just be sensible. Some governments have “minders” who might be posing as your taxi driver, translator, or guide. You just never know.

11. I even recommend you actually look like a tourist. This might seem like a silly one, but leave your Easy-Rig at home and don’t be afraid to look like a dorky tourist. You’d be amazed how many shots you can get when you just sling a camera around your neck, don your Hoka running shoes and have that wide-eyed-deer-in-the-headlights look on your face.